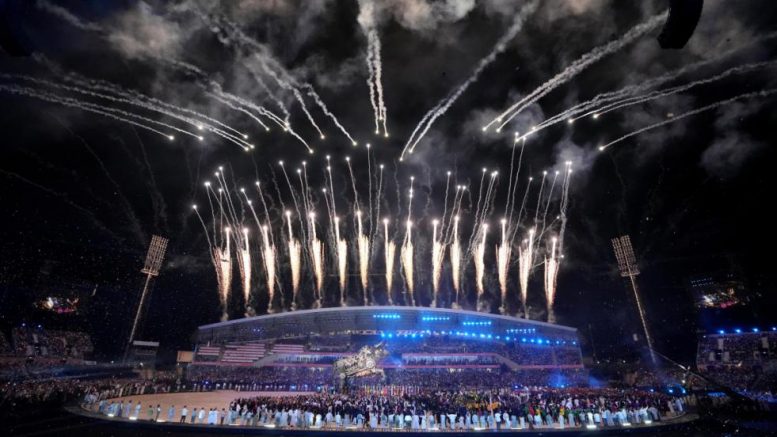 Birmingham’s Commonwealth Games is drawing to a close after 11 days of sporting action – but not without putting on a closing ceremony to remember.

Alexander Stadium will host a high-octane production that will celebrate the musical heritage of the West Midlands.

Along with a star musical and theatrical line, the closing ceremony will also include a formal handover to the state of Victoria, Australia, which is hosting the 2026 Commonwealth Games.

Martin Green, chief creative officer of the Birmingham Games, said: “With this closing ceremony, we wanted to create a spectacular line-up of global artists from the West Midlands for an exhilarating musical production to conclude an unforgettable 11 days of sport and culture.

Join in with #B2022Festival’s Closing Ceremony celebrations at Victoria Square, with a special performance from @band_friendly 🔥 🔥

Catch the Brum Tings themselves on the main stage at 7PM before our Closing Ceremony Watch Party!

“The medley of high-octane performances will celebrate the vibrant energy and cultural heritage of this incredible city, as we bring these spectacular home Games to a fitting end.”

Here’s everything you need to know from its start time, line up and how to tune in.

When is the Birmingham Commonwealth Games Closing Ceremony? How to watch

The ceremony will mark the end of a games that brought together 4,500 Commonwealth athletes competing across 19 sports and eight para-sports.

Viewers will be able to tune into the ceremony on BBC One and BBC iPlayer.

Broadcaster Clare Balding will be hosting the celebrations from 8 pm, running until 10 pm.

Rambert dance in Peaky Blinders: The Redemption of Thomas Shelby, a new official dance theatre event, written by the creator of Peaky Blinders Steven Knight, coming to theatres in the UK this year.

Laura Mvula, Ash, Mahalia and Musical Youth are also confirmed to appear along with Neelam Gill, Panjabi MC, Talulah-Eve, The Selecter and UB40.

The celebrations will also pay tribute to one of the city’s major exports over the past decade with a highly anticipated theatrical sequence of Peaky Blinders: The Redemption Of Thomas Shelby.

Viewers will also be treated to a special performance by the British singer Mvula of a newly commissioned track inspired by the TV series’ theme song – Nick Cave’s Red Right Hand.

The theatre production, written and adapted by the show’s creator Steven Knight, will host its world premiere on September 27 as part of the Birmingham 2022 Festival.

Prime Minister Boris Johnson said: “The past 11 days have been a shining example of the power of sport in strengthening the ties between our unique partnership of Commonwealth nations.

“I’d like to thank the brilliant volunteers, the roaring crowds and every athlete who has dived, hurdled or wrestled their way to victory for making these Commonwealth Games the best yet.

“And I am particularly proud of the city of Birmingham for being fantastic first-time hosts and welcoming our Commonwealth friends with open arms – cementing the UK’s well-deserved reputation for hosting major sporting events on the global stage.

“The success of Birmingham 2022 will be measured not only in medals won or records broken, but also by the number of people inspired to take up sport as a result, and who will be able to thanks to this Government’s massive investment in grassroots sport in recent years.

“And when the athletes fly home and the banners come down, it’s the people of the West Midlands who will reap the rewards from the lasting economic legacy these Games have secured that will drive trade, jobs and growth across the region for a generation to come.”