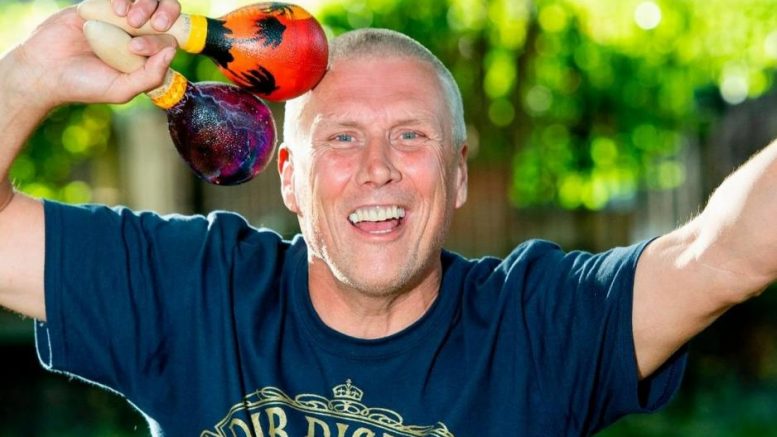 HAPPY Mondays star Bez, who lives in Herefordshire, has said he is only two or three pay cheques away from being homeless again.

Speaking as his new book Buzzin’: The Nine Lives of a Happy Monday was released, Bez, whose real name is Mark Berry, said he was as close as most people to losing his home in rural Herefordshire.

In September, Bez, who has been seen at Calandras clothes shop in Church Street, Hereford, married Firouzeh Razavi in Kentchurch, near his home in the Golden Valley.

Renowned for his dancing along singer Shaun Ryder with the Happy Mondays and Black Grape, the 58-year-old tells his story in the new book.

From drugged-up denizen of the Madchester scene to a middle age of beekeeping and political activism, Waterstones says Buzzin’ tells the weird, wild and wonderfully deranged life story of Mark Berry, aka Bez, the iconic Happy Mondays dancer who captured the raving zeitgeist like nobody else.

At the height of his initial, turn-of-the-1990s infamy as the maraca-wielding dancer with “Madchester” giants Happy Mondays, the pop-eyed Bez, was visibly a danger to society.

Want to stay up to date with all the latest news for your local area? It’s easy, just sign up for our weekly email newsletter here and all the important stories that matter to you will be delivered straight to your inbox.

He became the so-called Chemical Generation’s bug-eyed pied piper, every weekend leading millions out to oblivion and beyond, as they adopted his E-gobbling party lifestyle.

The bookshop chain’s overview added: “Neither an accomplished musician nor even a very good dancer, Bez was a prime candidate for fleeting celebrity, soon to sink into ‘Where Are They Now?’ obscurity.

“That, however, never happened, nor does it show any sign of happening. Through Black Grape, the second band he co-fronted with the Mondays’ Shaun Ryder, and his ever-presence in the mass media, Bez’s popularity has grown exponentially, his star rocketing ever upwards.”

It added: “His adult life has been extraordinary: unbelievable scrapes with mortality, periods of financial ruin, mindf*** moments like when David Bowie genuflected before him, and enough narcotic-strewn hi-jinx to fill several more volumes of memoir.”

And, as reported by i News, the father of three and grandfather of one said: “In a funny way, I’ve lived a charmed life.

“But, you know, like everyone else, I’m still two or three pay cheques away from being homeless again, and I never forget that.

“I worry about putting food on the table every day, so I’m in the job market. I’m open to offers.”