ROMSTOCK organisers have pulled off a musical scoop by booking original members of The Quarrymen as their headline act.

The band included John Lennon as a founder member and went onto evolve into The Beatles.

Initial band member Rod Davis, a former schoolfriend of Lennon’s, will feature alongside Charles Newby, who played several gigs with the Beatles after Stuart Sutcliffe left the band.

The Quarrymen’s appearance at Romstock on Saturday, June 9, arrived purely by chance thanks to the festival’s band co-ordinator Mark Moran’s daughter attending university in Liverpool.

She informed her Dad there was a plaque on a house around the corner to where she lived in Woolton where the Quarrymen used to rehearse.

Mark said: “I’ve always been a huge Beatles fan and it got me wondering whether The Quarrymen were still going.

“It’s a long story, but I managed to get in touch with Rod Davis and talking to him was just pure gold dust. He’s part of musical history!

“I asked him whether the Quarrymen would be interested in appearing at Romstock and we’ve managed to reach a deal. If you don’t ask, you won’t get!”

Rod revealed that The Quarrymen were persuaded to take the stage again when they all attended The Cavern’s 40th birthday back in 1997 and have since been reunited and playing together.

He recalled: “I’ve known John Lennon since he was five years old when we both went to Sunday School together and later went to the same school.

“We were 14 at the time when we formed The Quarrymen. We were all inspired by the music of Lonnie Donnigan. I bought myself a banjo and the following day I was invited to join the band.

“There was no shortage of people wanting to join the band, but it seemed that if you had a musical instrument, then you were in.

“I was only in the band for about a year. I preferred skiffle but the band was leaning more towards rock n’ roll. You couldn’t have a banjo player in a rock n’ roll band so I Ieft. The washboard player left at the same time.

“It was a period when people came into the band and others went out. Paul McCartney took over my slot!

“The band went onto change names on several occasions from Johnny and the Moondogs to the Silver Beetles and then The Beatles.”

Prior to performing at Romstock, The Quarrymen will be staging a ‘meet and greet’.

Mark added: “It’s important that people talk to them and hear of the stories they have to tell, because realistically they’re not going to be around for that much longer.

“We don’t pay enough tribute to our musical history.

“At the moment. we’ve got eight bands appearing at Romstock, most of which are tribute bands.

“I was worried people might think the Quarrymen might be a tribute band as well, but this is the real thing.”

Romstock takes place on Saturday, June 9, at Romlsey Playing fields on St Kenelms Road, starting at noon and going through to 9pm.

This year will also feature a ‘Grease’ section, with a band being created especially for the festival, and organisers have promised a surprise. 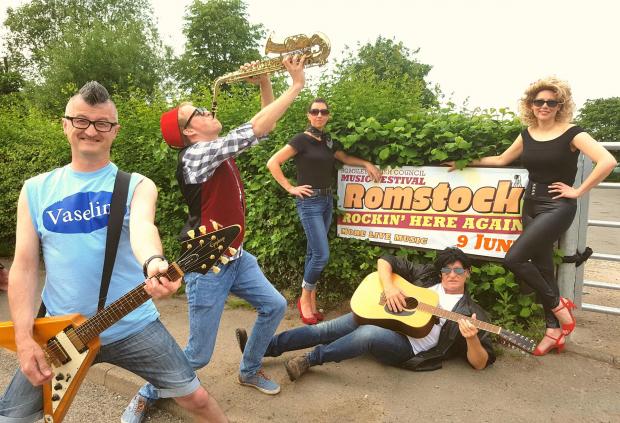 There is also a children’s play area, skate park, licensed bar and various food stalls, while people can also bring their own drinks as long as they are not in glass bottles.

Early bird wrist bands, which are available from the Co-op in Romsley or online from the Romstock website, cost £15 per adult, £3 for children and under 5’s free.

All profits go to youth community projects in the parish.

From self-tanning products to bbq sauce, see what items have had the most success following their Dragon Dens debut. Dudley News | What’s On …

Jeremy Clarkson has revealed that he had his testicles “smashed” by a cow. Dudley News | What’s On …