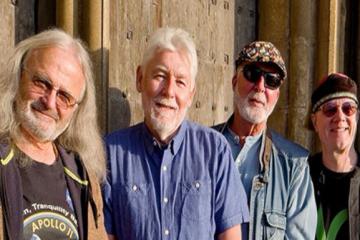 TICKETS are still available for a special birthday show by the legendary folk rock band Fairport Convention in Dudley next week.

The show at Dudley Town Hall on Wednesday November 2 is a special one-off to celebrate the birthday of bassist and longest-serving member Dave ‘Peggy’ Pegg.

Special guests Ralph McTell, Anna Ryder, Vo Fletcher, Paul Mitchell and AJ Clarke will be joining the band to celebrate Pegg’s 75th birthday, while former drummer Dave Mattacks will be back on the drum stool.

“Now I am delighted to share my 75th with some of the great friends I’ve worked with in the past including Ralph McTell, Anna Ryder, Anthony John Clarke, Paul Mitchell, Vo Vletcher, Tom Leary and, from the USA, Brian O’Malley and drummer Dave Mattacks.

“This year I am enjoying my 52nd year as Fairport’s bassist. So in the second half of the concert we’ll perform some of our most popular repertoire.

“It’s great to still be playing professionally at the age of 75 – I’m so glad I avoided getting a ‘proper’ job.”

A number of extra tickets for the show at the St James’s Road venue have been released due to popular demand.

Rupert Knowlden, Dudley Borough Halls manager, said: “We’re delighted to be welcoming such an iconic band to the borough – and with it being Peggy’s 75th birthday on the same day, it promises to be an extra special event.

“This year marks their 55th anniversary as a band, and although of course there have been line-up changes along the way the passion for performance has remained and shone through.

“The band has won a BBC Lifetime Achievement Award and BBC Radio 2 listeners voted their record Liege & Lief the most influential folk album of all time.

“This is the only date they have booked in for the Black Country and Birmingham on their winter tour so we would urge people to snap up one of the last few tickets to come and catch them live.”